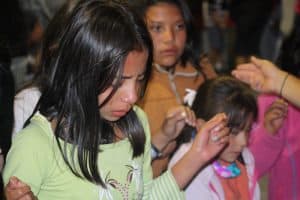 Kidfest Ecuador (or Festiniños as we called it) was everything we could have dreamed of and MORE! God shook our little campground and moved in life-changing ways among the teachers and the children.

We hosted a group of 45 people from Living Waters Christian Fellowship in Fountain Valley, California as we collaborated with the Church of God in Ecuador to host the first ever Kidfest event. The team from California offered intensive teacher training in Children’s ministry as well as a weekend camp for the kids. 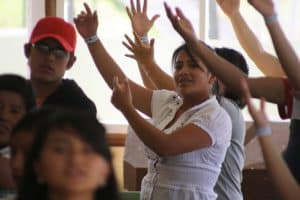 We began the event with around 100 teachers. These are Ecuadorians who are currently teaching in Sunday school or have a desire to work with kids in their churches. The event was kicked off as National Overseer, Richar Mendoza, shared his passion for children’s ministry to become a priority in Ecuadorian churches. Then, the teachers spent an intense day learning creative methods they can use in their ministry. On the final day, we had a commissioning service where each teacher was confirmed in their calling and sent forth to do the work of the Kingdom.

Then the fun REALLY began as 300 kids arrived for a weekend of camp! For most of these kids, this was their first time to ever attend any type of camp like this. One hundred of these kids were from the local social ministries (ministries that reach out to street kids). This was a life-shaping weekend for sure. 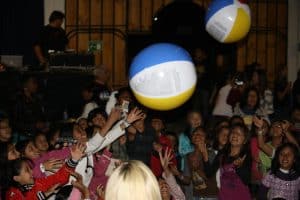 There were lots of time for fun and games, but the most amazing part was what happened during the worship services. In the very first service, I could tell the teachers were getting frustrated because the kids were VERY restless and not listening well. Imagine, a room crammed to capacity with kids who are NOT used to this type of service. But as the altar time began, the Spirit of God moved in a mighty way and there was a sweet hush as the kids really plugged in. Many children came forward to pray with the team, but afterwards they began to huddle in little groups praying for each other! They were weeping as God touched them! The Ecuadorian adults were amazed, as they had never seen God move among children in this way.

Throughout the weekend, God continued to move like this in our services. Children were speaking in tongues and worshipping God in pure joy. One man, who heard about the service from a counselor, showed up 5 hours early for service so that he could be there (at this KIDS service) to receive the Holy Spirit.  A little girl who lives in an abusive situation, prayed with the team and later told her counselor that she knows now that God is with her and loves her. Another child felt called to become a preacher. REVIVAL was sparked among the children of Ecuador during Festiniños.

The teachers are HUNGRY for more training, and we are going to help provide that. The pastors are beginning to understand the importance of children’s ministry and are working to establish that in their churches. The churches are DESPERATE for that type of worship. God is going to do some miraculous things!

We want to thank those from Living Waters who sacrificed to make this event happen. Also, thank you to our many friends and family members who gave to help sponsor the children from the social ministries. And as always, thank you to everyone who continually supports our family, allowing us to be a vessel for God’s blessings.

Here is our video recap: